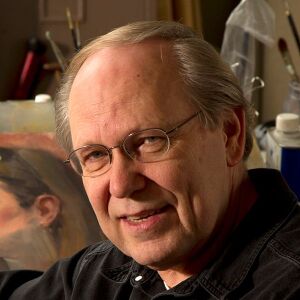 In addition to being an accomplished painter, muralist, and illustrator, Robert Barrett is also a BYU professor in the Department of Design. Robert received a BFA in painting from the University of Utah and an MA and MFA in painting from the University of Iowa. He has been awarded the Karl G. Maeser Award for Teaching Excellence at BYU as well as the Karl G. Maeser Research and Creative Arts Award. He was selected as the 2010 Distinguished Educator in the Arts by the Society of Illustrators in New York City and as one of the Most Honored Living Artists of Utah by the Springville Museum of Art.

Robert studied painting in Europe as the recipient of a German academic exchange grant and was an artist in residence at the Kimball Art Center as the recipient of a joint grant from the National Endowment for the Arts and the Utah Arts Council. He has received multiple awards for his work both locally and nationally.

His book Life Drawing: How to Portray the Figure with Accuracy and Expression is currently used as a text at several colleges, universities, and art schools. He more recently completed a children’s book on the Berlin Candy Bomber entitled Christmas from Heaven. Robert has completed multiple portrait commissions, and his work is included in a number of private and public collections.